A tribute presented by Lisa Beale at her father’s funeral. 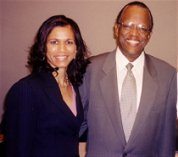 I came to work with my father in his weight reduction practice three and a half years ago. I left the area for eleven years after college. After a short stint in corporate America, I fairly quickly became an instrumental part of several start up companies. I was learning how to become an entrepreneur and a leader – I would constantly consult with my father on my decisions.

It was while I was living in Los Angeles that my father asked me to come back home and work with him. At the time, my sister had been working with my father for nine years. But, Vicki’s passion is horses. She is an excellent equestrian. So when I returned to Washington, Vicki was able to follow her dreams. My father had peace of mind and was proud, knowing that Vicki was happy being with her horses.

Working side by side with my father was amazing. He and I got along so well, we never fought, we never bickered and we never argued. More than a “father / daughter” relationship, we had an extremely high level of respect for one another. We thought so much alike. Or as he used to say, “I kept thinking like him.”

He would tell me almost every day how happy he was that I was there with him. He told me that I was able to lift so many burdens and responsibilities off of his shoulders. He emailed me on one of his vacations that it was the first time that he was truly able to relax during his days off because he knew I was there. I know that he was very proud of me.

I always said that I would never trade being with my father for anything in the world. It is really indescribable how we felt for one another. If you ever saw us together, you could tell that our relationship was very unique and very special to both of us. He was my best friend.

We would laugh every day. My father was hilarious, and even I picked up a little bit of his sense of humor. At the office, Mrs. Leavy, who has been working with my father since he started his family practice in the early 70’s, the patients and I loved listening to his stories and his jokes. And I could always get him to crack up at the comedy show that is my dating life.

Our patients really loved talking to my father – well most of the time. Except for the days that they were “On his list,” or when they would say, “Please, I don’t want to see your father, let me wait until next week when I’ve lost some weight.” But, after my father would talk with them they usually left with a newfound focus, they felt uplifted and they had a smile on their face.

On the last day that I saw my father alive, my friend Beverly and I had gone to the Omega House in Washington to drop off some canned goods. Three of the Ques started talking to us and one of them said, “This is Brother Beale’s daughter. You know he pledged in ’62 at Alpha Chapter and was Basileus his senior year. He is a charter member of Tau Pi Chapter in Columbia. Her father is a legend.”

Almost every where I go in Washington and mention my name, people always say, “You’re Dr. Beale’s daughter? Tell your father I promise I’m coming back to lose my weight, but please tell him not to fuss.” It’s like being the daughter of a famous person.

So many people have told me how much they will miss his laugh, his spirit, his advice and his compassion. I know it is not just my family, we have all lost a family member.

My father was the backbone of our family – he took care of all us in so many ways. At the time of his death he was in the midst of planning a birthday party for my grandfather Dr. Robert S. Beale, Sr. For yesterday was his 93rd birthday.

Taking care of us was a responsibility that he was honored to have. But once I got back, I started taking care of him in very subtle ways. For example, my father is affectionately known as “The Fat Doctor”. He also had high blood pressure. But every day on the sly he would get an order of bacon and eat it all in 40 seconds. I knew I could not stop him from ordering the bacon, so instead I would rush into his office and eat half of it so it would not be quite so bad.

We also have prerecorded music that plays in the office. On one of the tapes is the song “Atomic Dog”. Every single time that song came on he would start stepping. I would have to say, “Daddy please, it is way too early in the morning for you to be jumping up and down.” And he would say, “My little girl is always looking after her Paw.”

He really loved his life, but he loved my mother more than anything in the world. My mother has class, style, grace and beauty, that even in all of my years, I still do not quite have. But, I am always trying. He said he only knew of two real life angels, one is my late grandmother and the other is my mother.

My parents met as sophomores at Howard University. My mother was pledging Alpha Kappa Alpha, and my father Omega Psi Phi. Their deans of pledges were dating so the ivies and the lamps were always together. They got married at age 20 and spent 42 amazing years together. They had such a good time. And even though it would not be my father’s first choice to go to the ballet or my mother’s first choice to go to Bike Week in Myrtle Beach, they shared a lifetime of experiences.

I love going to Howard U’s Homecoming with my parents. I would sing with my mother and the other Alpha Chapter AKAs, as I carefully watch my father stepping with the Ques, hoping that he would not over do it. But after this year’s Homecoming he said he was going to be is such good shape next year, that he was going to take his shirt off in the circle. I am not sure if any of us would be ready for that.

I told my mother the other day, that she had something in those 42 years with my father that I will never have. Their marriage is a blessing.

I learned so much from my father. This year we wrote and published a book together based on his weight loss practice. Now his vision will live forever in print.

He is no longer physically with me, but I am ready to carry on his legacy. It was never a thought that I would shut down the office either permanently or temporarily. I was at the office bright and early at 6:30am this Tuesday morning and we stayed open during regular business hours throughout the week. Ms. Leavy suggested that we close on Friday though out of respect for my father. Except for legal holidays, my father never closed the office, so this one day in honor of his memory was okay.

Most people could not believe I was there in the office this week – it never even crossed my mind that I wouldn’t be. But Vicki, Kevin and my grandmother stayed with and took care of my mother, so I did not have to worry as much.

Being with our patients this week has been great. Many of them did not know of my father’s passing until they walked in the office. But now every day I will get to talk to people about how wonderful my father was and how much he touched their lives.

Since his death, I have not been angry, I have not questioned why – I have been at an amazing level of peace knowing that my father was an extremely happy man and lived a full life.

Although I am very sad, and I allow myself to cry freely, I know God has directed my life at least since I was 16 years old to bring me to this exact place. I actually knew this well before my father’s passing – that me being so close to him in these past years was God’s plan.

So, Daddy, I am not scared, I am not afraid. I know that a part of you lives on inside of me. I have your strength, determination, compassion and courage. I know that you are proud of me.

Daddy I will leave you today with the words that are printed in the dedication of our book:

“I dedicate this book to my father Robert S. Beale, Jr., M.D. for his unconditional love and support throughout my life and my career. Daddy, I owe all of my success to you. Love, Lisa.”

Near the Big Chair